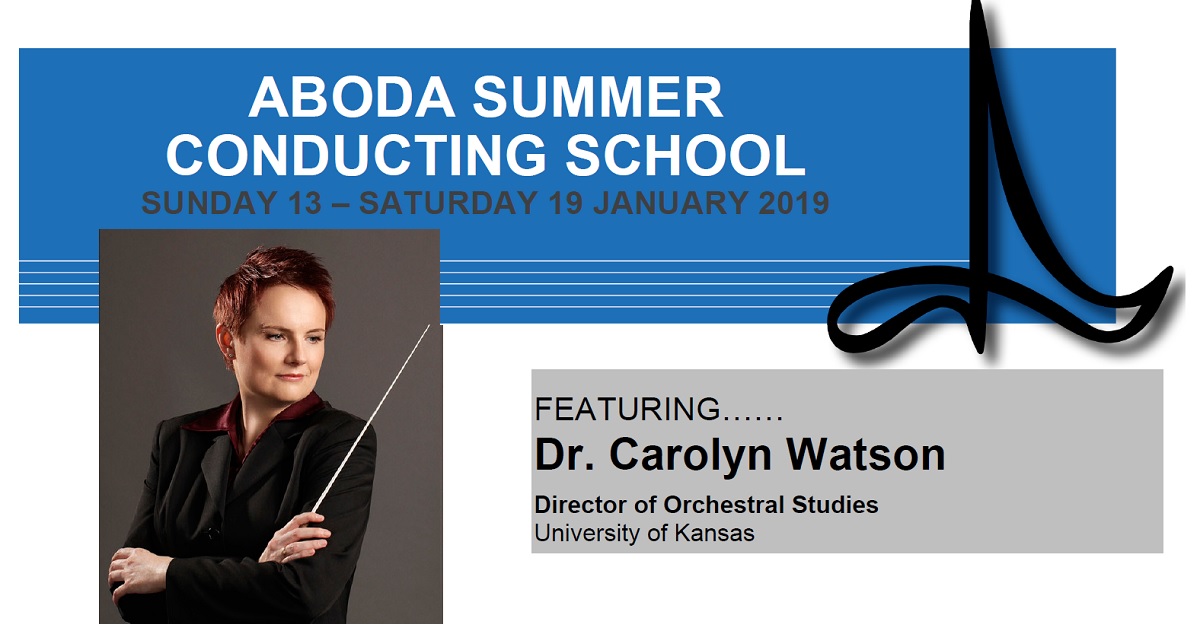 Now in its thirty-second year, the ABODA Summer Conducting School sets you up for a great year of conducting and ensemble music making. Expand and refine your conducting skills under the expert guidance of Dr Carolyn Watson & Dr Andrew Mathers. Summer School is a great way to credit your professional development requirements. For your folio, ABODA issues end-of-course certificates detailing hours attended.

Not sure if it’s for you? Read what participants said about past Summer Schools

A major prizewinner at the 2012 Emmerich Kálmán International Operetta Conducting Competition in Budapest, Carolyn Watson was also a Fellow of the American Academy of Conducting at the Aspen Music Festival where she studied with David Zinman. She has conducted orchestras throughout Europe including the Brandenburg Symphony, BBC Concert Orchestra, North Czech Philharmonic Orchestra, Kodály Philharmonic, Savaria Symphony Orchestra, Budapest Operetta Theatre, Bulgarian State Opera Bourgas and in Russia, the St. Petersburg Chamber Philharmonic. In 2017 Carolyn was one of six conductors selected for the elite Dallas Opera Institute for Women Conductors and has participated in master classes with Marin Alsop, Peter Eötvös, Yoel Levi, Martyn Brabbins and Alex Polishchuk.

Carolyn conducted musicians of the Berlin Philharmonic in Interaktion 2010 and was Musical Assistant at the Staatsoper Berlin in 2012 for Infektion!, a festival of modern theatre celebrating the works of John Cage. She was resident at the Israeli National Opera during 2009 and assisted Sir Charles Mackerras on his final two productions at The Royal Opera, Covent Garden and Glyndebourne the following year. Carolyn is the recipient of a number of prestigious national and international awards for young conductors including the Brian Stacey Award for emerging Australian conductors, Sir Charles Mackerras Conducting Prize awarded via the Australian Music Foundation in London, Opera Foundation Australia’s Bayreuth Opera Award and Berlin New Music Opera Award and the Nelly Apt Conducting Scholarship. She is the beneficiary of support from the American Australian Association’s Dame Joan Sutherland Fund and a Sheila Pryor Study Grant from the Australian Opera Auditions Committee.

Featured in a national conductor preview with the Sydney Symphony, Carolyn in 2011, was also Assistant Conductor for the inaugural Australian World Orchestra concert season in Sydney working with Simone Young. Also during 2011 she was Associate Conductor of the Tasmania Discovery Orchestra and Assistant Chorus Master of Sydney Philharmonia Choirs. In 2008 Carolyn conducted the Scottish Chamber Orchestra during the Orkney Conducting Course before returning home to conduct the World Youth Day Orchestra on the occasion of the Pope’s arrival in Australia for a live audience of one hundred thousand and a worldwide-televised audience of some five million people.

Winner of the 2015 American Prize in Orchestral Performance and Runner-up for The American Prize in Conducting, Carolyn is also an enthusiastic music educator and currently serves as Director of Orchestral Studies at The University of Kansas whilst continuing to enjoy an active freelance career throughout the US, Europe and Australia. From 2013-15 she held the prestigious position of Music Director of the Interlochen Arts Academy Orchestra, having also conducted the World Youth Symphony Orchestra and Detroit Symphony Civic Orchestra since moving to the US in 2013.

Carolyn holds a PhD in Performance (Conducting) from the University of Sydney where her principal teacher was Imre Palló the subject of her doctoral thesis was Gesture as Communication: The Art of Carlos Kleiber.