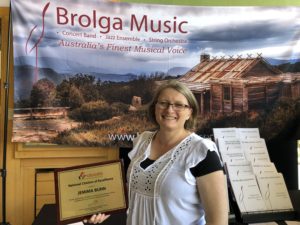 On the 4th of October 2019, ABODA National presented ABODA Victoria Past President Jemima Bunn with the National Citation of Excellence. Congratulations Jemima!!

The citation of excellence is the highest award available to members of ABODA. This award recognises outstanding personal achievement and represents peer recognition of the work of the recipient both in Australia and overseas, for both ABODA and the music community. It is a recognition of enormous output and investment that this ABODA member has given to instrumental music education in Australia.  It is with great pride that I announce that the 2018 recipient of the National Citation of Excellence is Jemima Bunn.

In her role as a performer, educator, conductor, researcher, ABODA committee member and more recently, publisher, Jemima has achieved excellence across all of these modes of activity and on all fronts, has made a significant contribution to Australian music education.

We first experienced Jemima’s passion for the wind band genre when as a clarinet player she successfully applied to join the first Australian National Youth Band for their tour to Japan in 1990.  From there Jemima undertook a Bachelor of Education, specializing in Music Education at Melbourne University.  Jemima’s first teaching post was at Camberwell High School, where as a beginning teacher she took a small, below average music program and built it to a level of excellence, culminating in a tour to the USA where the Camberwell Wind Ensemble served as a clinic ensemble at the prestigious Midwest Band and Orchestra Clinic in Chicago, USA.

Following this achievement, Jemima received a teaching assistant scholarship to attend the University of Wisconsin, Madison, where she completed a Masters of Music Education.  Upon her return, she soon took the position as Director of Music at Glen Waverley Secondary College in Melbourne, and again raised an average music program to a level of excellence in a very short period of time.  She is now serving as the Director of Music at Blackburn High School, arguably Victoria’s flagship music program, continuing the legacy of excellence in music education, as evidenced by not only her own Symphonic Band performing at the 2017 Midwest Band and Orchestra Clinic in Chicago, but also the Blackburn High School Stage Band also performing in the same conference.  This is a significant achievement for any school, and the first Australian school to have accomplished this honour.

Concurrently with her career as a highly successful music educator, Jemima also served on the ABODA committee, both at the state level and national level.  Throughout many years working with ABODA, she has held the post of Victorian State President and National President and was the driving force behind the committee that ran the highly successful 2014 ANBOC in Victoria.  Her selfless contribution to the design and implementation of countless ABODA activities has ensured that ABODA remains at the forefront of contributing to the betterment of music education in Australia.  It is immeasurable how many of Australia’s music educator’s have been positively impacted upon by the investment of time, energy and ingenuity that Jemima has brought to the ABODA community.

Aside from her teaching commitments, Jemima’s energies are now focused on her PhD research in Music Education, exploring the lived experience of music students and questioning our current music education structures, with a view to providing even more meaningful musical experiences for our students in the future, and as the owner of Brolga Music, expanding on arguably Australia’s most significant publisher of high quality educational music, ensuring a pathway for Australian composers to share their unique voice with Australia and the whole world.  Through her role as publisher, she has expanded the Brolga catalogue to include more genres and ensured that Brolga represents Australian excellence in music education on an international stage.

Two major attributes of a recipient of the Citation of Excellence are that:

There is no doubt that Jemima has established herself with respect to such criteria, both here and internationally. She is a fine musician, an excellent conductor and outstanding educator. To conclude, Jemima Bunn is a person of the highest integrity, and such integrity ensures she stands as a role model for her students, her colleagues and those she mentors in every facet of her work.

It is with great pleasure that ABODA National awards Jemima Bunn the 2018 Citation of Excellence.