Conducting 101: The Foundations of Conducting Technique and Ensemble Direction

The last term of the school year is here and music tutors and directors are frantically preparing for a multitude of concerts, speech nights, and valedictory dinners. I often begin this term wondering how I will sustain the energy and enthusiasm to inspire the students through the coming nine weeks; but I may have found a solution. Attend a conducting workshop! It is a booster shot of motivation and a mini boot camp all rolled into one.

ABODA provided an excellent conducting workshop on Friday 18 October and Rob Wagner was the motivation I needed. He presented a ‘nuts and bolts’, 3-hour session on the very essence of basic conducting skills. The power of his delivery began with 15 minutes silence, immediately heightening my levels of concentration. Without a spoken word, Rob indicated that we watch him and then copy him. His right hand conducted a three-beat pattern, then his left hand took over, and then he used both hands. Patterns changed, speeds changed, directions changed and it was a fabulous beginning to the afternoon’s presentation.

Rob gave us a hearty welcome and explained the importance and purpose of his ‘silent treatment’.

There was an emphasis on our wellbeing and I was grateful for Robs warm up exercises and his advice on taking care of ourselves. Although it is highly unlikely that conducting will ever become a sport, it is still important to prepare your body. I am curious to know how many calories you could lose by conducting a Shostakovich Symphony!

The first screen shot was a delightful way for Rob to connect with a sea of unknown faces. 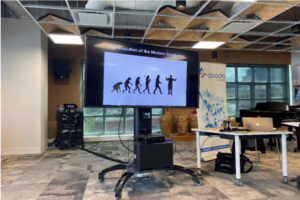 Rob had planned a packed sequential agenda, which began with the simplest but sometimes forgotten topic of how to choose a baton. Is your arm long or short? What size ensemble are you conducting? Perhaps avoid a baton with a large bulb if your hands are small, as it takes up too much room and restricts movement. Oh, and the balance point will help you decide on the length. A baton has a balance point?

The KISS Principle – Keep it Simple (Staff). Rob encouraged us to use this to obtain the best from our ensembles. His advice was to ‘be clear in our actions’ and keep our movements uncomplicated. He reiterated the phrase, ‘it’s all about the music’ so only move the body segment that best represents the music and mood you are conveying.

Rudolph Laban, a Hungarian man who studied and developed a notation and language of movement has influenced Rod’s conducting method. Rob has adopted the Eight Efforts of Movement to describe and assist with conducting techniques. Each technique uses one or more of the ‘Three Hinges’, being the wrist, elbow or shoulder.

As we progressed through each movement, we began introducing the other hinges. Float requires the use of the elbow, with a slow, gentle movement. 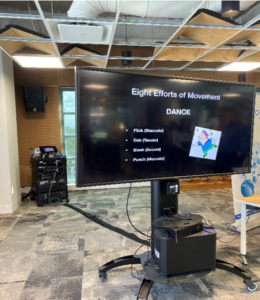 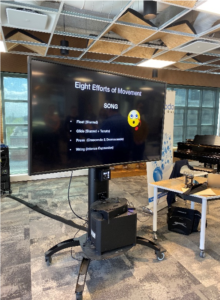 After familiarising ourselves with the Eight Efforts of Movement, Rob had us repeatedly using these in a four-beat pattern, one after the other. This was a wonderful exercise and at this point of the afternoon, I thought we were all doing extremely well…. until Rob took us through the next eight sections. I could definitely benefit from another session on these areas alone.

getting faster = a smaller more precise beat pattern. To do this successfully, you must have in mind the tempos at which you wish to arrive

There was a clear screen shot for each of these points. The shots of notation passages were sensational and in our own time, we could go through and practise our fermatas, releases or cuing. 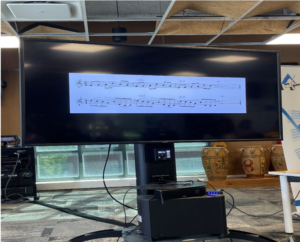 Rob was amazing and he certainly put everyone through their paces but he saved the best until last. We all moved across the room, placing a music stand in front of us. Rod handed us a sheet with the heading:

By the time we reached exercise twelve, I can only hope that I was correctly distinguishing my left hand from my right hand but I was having too much fun to worry and I had too much pride to stop!

Rob, thank you for sharing your pedagogical skills with us. It was an extremely enjoyable afternoon and I am sure everyone was able to take away more than a couple of ideas or techniques. I am looking forward to the next session. 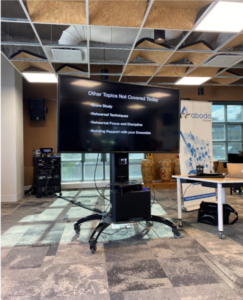