With her outstanding manner with players, high expectations, ability to deliver concepts concisely and insatiable passion for the music, it is little wonder that conductor Carolyn Watson is making waves in the American system, winning the 2015 American Prize for Conducting. In 2019 Carolyn will lead the ABODA Vic Summer Conducting School. We sat down to chat about her career, and advice on conducting training, repertoire selection and conducting bands vs. strings. 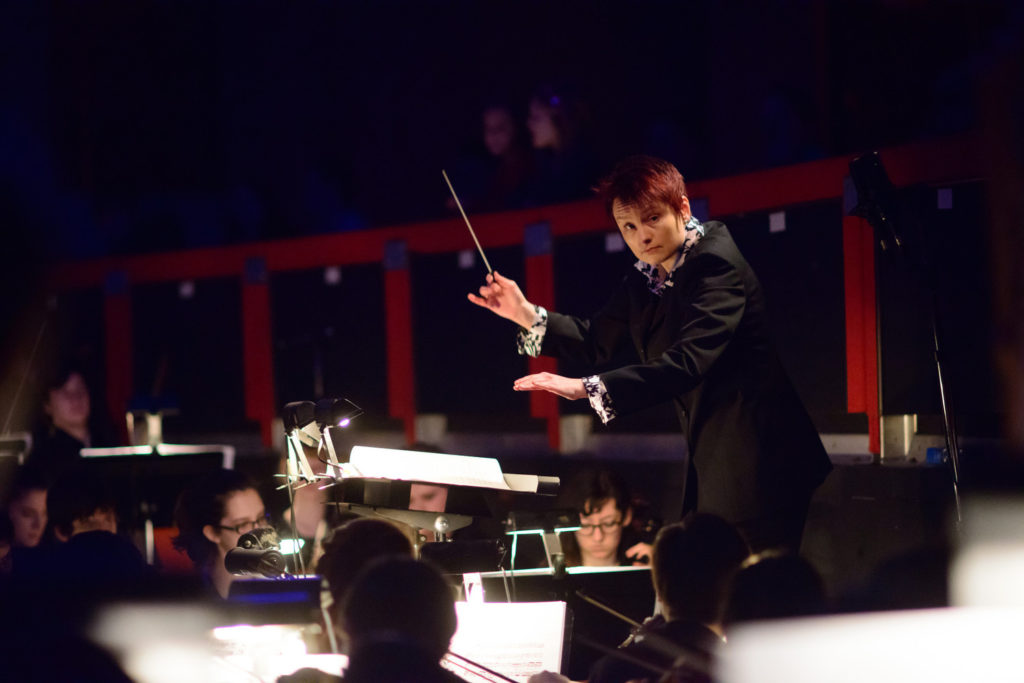 Looking back through your career a little you started out as a violinist and worked with the Australian Youth Orchestra, what happened after this?

I did music education for my undergraduate, with a double major in Music Education and Violin Performance in Sydney. I played for a year professionally in the pit for Phantom of the Opera and Miss Saigon in Sydney before I moved overseas. Then I was in Hungary for two years at the Kodaly Institute before I went to Germany and completed more violin study and played with some orchestras there.

What was your first teaching position?

When did you start studying conducting?

About five years into the job working at Sydney Grammar.  I wanted to learn a little bit more about conducting and what to do with my hands.  I thought I would just do a Masters in Conducting with no intention of doing anything other than that, and then one thing led to another and here we are.

I’m always interested to know what you feel are the most important things for a beginning conductor to start with.

Anybody can be a conductor if they are a good musician, it is easy to turn a good musician into a good conductor, but it is difficult to turn a conductor into a musician.  The depth and scope of your musical training and knowledge is really where it is at, and the rest you can learn. Maybe also conducting technique doesn’t matter as much as we think it matters… that has been my experience, anyway.

As an experienced conductor, what do you see the differences being between high school orchestras and somewhere like Interlochen or what you are expecting at Texas State?

Obviously the context dictates how far you as a conductor can go. You may have the most wonderful gestures that reflect every nuance in the score, however, if you are in front of a Year 7 band, that may not be necessarily the most important thing.  That aspect of being practical, and being able to help the players with practical matters and logistical things, what I call ‘geographical things’ like “This is where we stop.” “This is where we go.”  “This is where you need to watch, this is what you need to watch, and this is why you need to watch.”  Obviously the more advanced the players are the more subtleties they are going to pick up on in your conducting.

It is the age old concept of being what the players need us to be.

There is often debate about Strings versus Band conducting and some say that music is music but perhaps there are nuances between the two. How they produce sound is different if nothing else. Do you have thoughts on this and are there differences? Perhaps there are differences within the sections of an orchestra?

There are some differences. Working with young orchestras, I find I have to work much more closely with the strings and offer more many more directions and much more advice than with the wind and the brass generally.  I think there are a number of reasons for that, obviously the person that gets to be first chair oboe or second chair clarinet in a youth orchestra or even in a high school symphony, they have reached a certain level and are by definition a soloist, given that nobody else is playing the first oboe part or the second clarinet part. That’s a very different thing for a second violin section that might have 15 people in it. And each one of those 15 who would die on the spot if they thought that they had to play their part by themselves! There’s that sort of thinking shift – there is a big difference there. I’ve found also I have to give a lot more information and directives to the strings because I think to get young musicians on string instruments to sound good, there is a lot more involved, and it’s a longer process comparatively than with wind and brass instruments. I think we as conductors certainly working with high schools have to remember this and factor it into our approach and our pedagogy.

As far as conducting and ensemble direction goes, would you mind please sharing some of your most valuable pieces of wisdom?

Choose appropriate repertoire. That is probably my first one. I have done a lot of listening to young musicians and adjudicating at competitions with young bands and orchestras. I often hear young musicians working and playing very hard, and doing their best with music that is beyond them at this particular point in time, at this particular stage of their development. I think it is a wonderful thing to set the bar high and to push them, and to challenge them to be the best they can be, and even better.  But also at the same time this kind of approach has to be balanced with positive performance experiences and it’s about them going out onto stage with absolute confidence, that they can play together very, very well as an ensemble, and walk off feeling very proud that they have done a good job.

I’ve heard the 80/20 “rule” referred to before where 80% of the repertoire should be technically comfortable and 20% might be challenging. What are your thoughts on this?

I probably have a different philosophy to that because I tend to set the bar high and just a little bit beyond what the students think they are capable of.  When you say to them we are playing this piece and they go “oh no!”. Then you say “no I programmed it because I think you are good enough”. Straight away if it’s a piece they know and a composer they know or something that they have been dying to play, that gives them a lot of confidence. So you are instilling a lot of trust in their ability and as all of us that play an instrument know, when somebody believes in us you can achieve more that what you think is actually possible.

I guess that is also about making the musician accountable for their part and setting them up to understand that they are the ones in charge of the results.

Absolutely, and it’s a team, it’s exactly the same as a sporting team and with someone sitting 5th chair, inside 2nd desk, 3rd viola part, they might not feel like they are fundamental to the ensemble, but I think it is our job as directors to get the point across that they are fundamental to the ensemble. Nobody else is playing that particular part and if they don’t play it then nobody else is going to play it. Like sport, for them to do well and do their best, everybody has got to go to training and just because you might not be picked to play that week, that doesn’t mean that you don’t go to training… it actually means that you train harder.

In your experience as an adjudicator, other than poor repertoire choices, what are some of common mistakes you see and hear?

For ensembles, stage presence is something. You can often tell how well trained a group is simply by the way they enter and exit the stage and the means by which they go about getting themselves ready to play. There is a level of professionalism that comes with performing, and performing happens from the minute you walk onto the stage.  How you look, how you walk out on stage, uniform, dress attire, a school uniform, a performance uniform, coordinated clothing, deliberately unco-ordinated clothing, it is all part of the performance experience.

The place of conducting literature – are there any conducting texts you found particularly beneficial?

At one stage I read every text that was out there, as I was writing my doctoral dissertation. But I think conducting is not something that can necessarily be taught by books. This opinion might be a difference between a kind of ‘American band-type approach’ and a more traditional operatic and orchestral focus, which is the realm in which my work lies. Of course textbooks are helpful for the basic information, but once you’ve got that there is a whole lot more. In terms of books or texts, the composer’s score is really where it is at.

It is like choosing a favourite child, but who are your favourite composers?

Whoever I am conducting, so at the moment it’s Bartok, Liszt and Kodaly.

You mentioned that nothing is a substitute for the score and a mentor.  Who have been your musical heroes?

My number one music hero is Carlos Kleiber, every conductor’s musical hero I think! And Bernstein ranks up there very highly as well.

If you could look across the world and see everything that is going on musically, and could pick your gig, what would you jump at?

Oh wow! I’m not sure that I’ve got the answer to that question actually. Most conductors would say the Berlin Philharmonic or the Vienna Philharmonic, but I am fairly adamant that’s not a job that I would embrace with open arms as it were. Often life chooses and has a way of putting people where they should be and you know yourself where you are at, and where you can be. With conducting it can be a big game of chance, and some people are fortunate to be in the right place at the right time and get opportunities and make the most of them, and their career goes from there. It is difficult to know if somebody else got a similar opportunity, whether that might have happened to them and whether their career would have developed similarly.  As to my ideal gig, I guess I have to say it is the one I am about to start.  I chose it didn’t I….!

As music educators, music advocacy is important and there are a few different approaches to this. What do you lead with when telling people about the joy that is music?

I don’t know that I have had to do too much of that in itself as I have been very fortunate in the places that I have worked as students have come to those places specifically for music and for orchestra. There are tests that say “yes if they do music that will do better in maths and science” which is all very well and good, but I don’t know if that is why we should be selling music.  I don’t think scientists are selling science as it makes better mathematicians. The media seems have a lot of stuff written about that, that’s a great thing.  However, music is of intrinsic value as of itself and that’s really what we’re about and hopefully that message can get out.

Growing up was there a piece that sparked your love of music or took your love to the next level?

To find out more about Carolyn and the wonderful work she is doing visit:

Want to work with Carolyn to improve your conducting? Register for the 2019 ABODA Vic Summer Conducing School now!

Register for the 2019 Summer School

There are no upcoming events at this time.